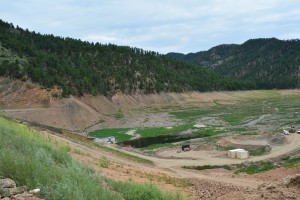 The City of Santa Fe Water Division has announced that construction of the new intake tower at McClure is substantially complete and it has officially begun to store water in the reservoir.

The refill process began when the McClure Dam outlet conduit was plugged on November 21, 2015 and the City closed the emergency drain valve, which was releasing water to the McClure Dam outlet, on December 1, 2015, after receiving Office of State Engineer approval to store water. Closure of the lowermost “emergency” valve on the tower was performed on December 1, 2015. Closure of these valves and outlets will lead to runoff and snow to begin filling the reservoir again.

Division officials expect the filling of the reservoir to get off to a great start due to sustained watershed runoff resulting from recent Fall rains and early significant accumulations of snow in the watershed.  Santa Fe River flows are still around 2.6 million gallons per day (MGD), despite recent reductions in watershed yield due to lower daytime and nighttime temperatures over the past few days, according to Alex Puglisi, Source of Supply Manger for the City.

While reconstruction work was being finalized at McClure, Nichols Reservoir levels have been brought to 87% since October utilizing increased runoff from the late summer rains and early snowmelt.  Additionally, there are still accumulations of snow up to 25.0 inches in the uppermost reaches of the watershed with a snow-water equivalency of 6.4 inches.

The Water Division’s Source of Supply Section will manage reservoir levels and releases of surface water out of McClure Reservoir in the future in order to meet Office of State Engineer (OSE), Dam Safety Bureau requirements governing the refilling of reservoirs. These requirements mandate the refilling of reservoirs at acceptable rates in consideration of possible detrimental impacts on dam integrity and safety if reservoir levels are raised too quickly.  The Division will be expected to keep reservoir level increases to approximately one foot per day throughout the filling process. One foot in the reservoir level increase at McClure does not equate to huge quantities of water during the early stages of the refilling process when the increases in depth occurs over a small surface area of the reservoir. However, future one foot increases in the reservoir’s depth across its entire surface area may require up to 38 MGD.

Accordingly, the Water Division has prepared a “fill plan” in accordance with these considerations, which has been accepted by the Dam Safety Bureau. The OSE has granted all necessary permissions for the refilling of the reservoir under the plan and all applicable conditions for the monitoring of dam integrity during the refilling process. It has advised the City that compliance with these conditions will be enforced by the OSE.