In a report to the Office of the State Engineer, the City of Santa Fe announced that water customers have decreased average daily water use from 101 gallons per person per day (GPCD) in 2013 to 95 GPCD in 2014, a decrease of 6% and the first time the city has ever fallen below the 100 GPCD threshold. Despite four of the driest years on record, Santa Fe is now the lowest in the Southwest Region. The GPCD calculation is a key performance measure of any municipal water conservation program.

Mayor Javier M. Gonzales said, “I am really proud of our city. This is a community-wide achievement that testifies to our commitment to real sustainability and a victory for the hard-working policy-makers and water division workers and every Santa Fean who has taken steps to conserve water. This isn’t the end of our efforts, just one achievement among many to come in our efforts to safeguard our children’s futures in Santa Fe.”

“This low per capita use represents a steady downward trend and is reflective of the values of the community,” said Nick Schiavo, City Public Utilities and Water Division Director. “The Water Conservation Program is successful because of a commitment from the entire community; from civic leaders who create the policy; to Water Division staff who plan and implement programs; to citizens who embrace water conservation as a lifestyle,” stated Schiavo.

The City began a water conservation program in 1997, building a comprehensive and effective program which has resulted in Santa Feans reducing per capita water consumption by more than 45 percent since tracking began in 1995.

“Though conserved water is an indirect source, we consider it to be our sixth source of supply, including two groundwater well fields, two surface water treatment plants, and use of reclaimed waste water, and the City of Santa Fe and its water customers enjoy one of the most effective and innovative water conservation programs in the entire nation—this cannot be over emphasized, but we can’t afford to forget we are in our fifth consecutive year of record-breaking drought, with much uncertainty regarding the climate, prolonged drought, and population growth,” said Rick Carpenter, City Water Resource and Conservation Manager.  “The challenge remains in our community to continue to be proactive in both water management and in our water conservation efforts,” said Carpenter. 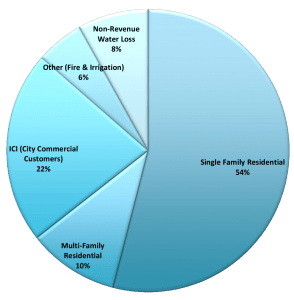 Santa Fe has achieved its low use numbers through the implementation of educational outreach and a comprehensive set of ordinances that require Santa Fe’s citizens and businesses comply with water conservation requirements designed to provide financial incentives to conserve water.

Even thought there is a drought, the City anticipates meeting demand, but should the drought conditions significantly worsen, the City could enact policy to reduce demand.

Santa Feans can prepare and better survive current and future droughts through a range of actions, including installing water efficient appliances and low-use water landscaping and adopting water conservation habits, like not letting the water run and finding and fixing leaks.

Customers are reminded there are seasonal time of day water conservation rules. From May 1 to October 31, no watering is allowed between 10am and 6pm, and it’s recommended no more than three times per week. Despite the City’s preparedness, water conservation remains a key component of addressing drought, so it’s critical that Santa Feans remain committed to their water-wise lifestyles.

Santa Fe’s average daily use is 95 gallons per person per day, which is substantially lower than the national average of about 150 gallons